The origins of the L-5, affectionately known as the "Flying Jeep", can be traced to the prewar civilian Stinson HW-75. The 75 horsepower civilian high-wing design was built by the Stinson Aircraft Company at Wayne, Michigan and first flew in 1939. The HW-75 featured two seats up front side-by-side, and a third "jumpseat" in the rear on which a small passenger could sit sideways. The design was easy to fly. Shortly after the introduction of the HW-75, Stinson became a subsidiary of the Vultee Aircraft corporation. Under Vultee management, the HW-75 was equipped with an 80-horsepower four-cylinder engine for the 1940 model year and the HW-75 became known as the Model 105 Voyager, referring to its 105 mph cruise speed. Fitted with a four-cylinder 90 hp Franklin engine for the 1941 model year, the type became known as the Model 10A. In the postwar era, the fuselage of the Model 10A was enlarged to accommodate four seats, and the four-cylinder powerplant was replaced with a Franklin 150 hp six-cylinder engine. This conversion became the Stinson Model 108 Voyager and the only civilian aircraft commercially produced by Stinson after WWII.

Six examples of the Model 105 Voyager were equipped with 80 horsepower Continental O-170 engines and provided to the military for testing under the experimental designation YO-54. Evaluated by the Air Corps in 1940 for potential use as a low-cost short-range observation aircraft, it failed to meet performance requirements. The Voyager was then completely re-engineered by Stinson into a much stronger and more powerful tandem-seat airplane that met rigorous Army engineering handbook standards for the design of military aircraft. The prototype, designated as the Model V-76 by Vultee / Stinson was accepted by the military after accelerated service trials and entered into service in December 1942 as the Army O-62 ('O' for observation). The L-5 carried a pilot and observer in a tandem-seating configuration, which was preferred by the military for observation work.

In March 1943, with the creation of the liaison category of light observation aircraft (previous examples came from Taylorcraft Aircraft as the L-2, and from Aeronca as their L-3, along with the numerous PiperL-4) the designation for Stinson's new purpose-built military design was changed to the L-5. The primary purpose as a liaison aircraft was courier and communication work, artillery spotting and casualty evacuation. The fuselage of later models was redesigned so the aircraft could also be used as an air ambulance, or for cargo work. With a wider and deeper rear fuselage section and a large rear door that folded downward, a litter patient or 250 pounds of cargo could be quickly loaded aboard.

The L-5 series was manufactured between December 1942 and September 1945, during which time 3,590 of the unarmed two-seaters were built for the U.S. armed forces, making it the second most widely used light observation aircraft of the war behind the Piper L-4 Cub. 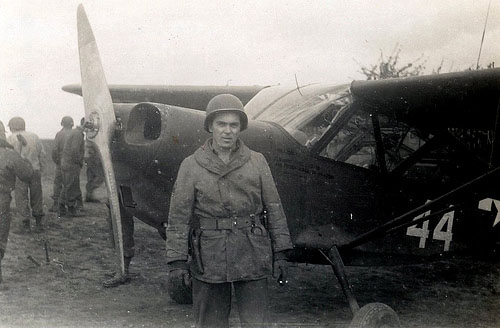